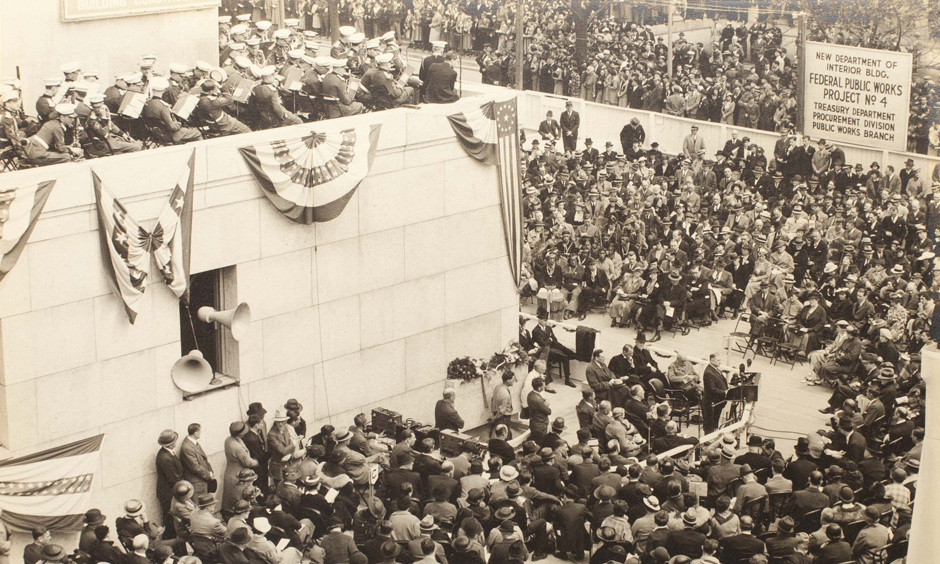 The Interior Department headquarters was the first building in Washington, D.C., to be authorized, designed, and built by the Franklin Delano Roosevelt administration. The building reflects the dedication and commitment to government service of President Roosevelt and 32nd Secretary of the Interior Harold Ickes, who believed that a "new day" had arrived, in which the government would provide for its citizens. The Interior building combines elements of both modern and classical architecture, and illustrates the principles of utility and economy characteristic of the "New Deal" style. The stripped classical motif rejected the lavish design, ornate decoration, and exorbitant construction costs of earlier federal buildings.

The building has seven stories and a basement. The design consists of six wings running east to west with a connecting central corridor running north to south. Most of the structure's exterior features smooth Indiana limestone, with accents of pink granite. The building has more than three miles of corridors, with the main corridor on each floor being a full two blocks long. There are 2,200 rooms in the building and specially designed spaces, such as an auditorium, museum, gymnasium, and library. More than 40 New Deal-era murals—the most of any U.S. federal building—commissioned by the Federal government are set strategically throughout the corridors.

The United States Congress passed legislation on June 8, 2010, to rename the Main Interior Building the Stewart Lee Udall Department of Interior Building. As the 37th Secretary of the Interior, Secretary Udall served from 1961 to 1969 under Presidents John F. Kennedy and Lyndon B. Johnson. His legacy is marked by his commitment to American Indian and Alaska Native communities, his forward-looking stewardship of the nation's natural resources, and his support for the arts and humanities.

For additional historical information about the building, see the following resources: