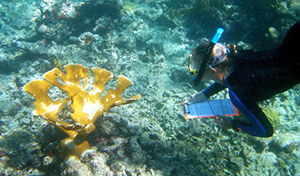 Learn more about the Interior's role in coral reef protection.

The United States has developed a national system of marine protected areas (MPAs) to advance the conservation and sustainable use of the nation's vital natural and cultural marine resources. The MPA Center is a partnership between NOAA and the Department of the Interior and is a resource for all federal, state, territorial and tribal programs responsible for the health of the nation's oceans. The MPA Center helps build management capacity and coordinate collaborative efforts in the protection of significant natural and cultural resources within MPA programs.