Wildfires Heat Up Across the West

Homes evacuated. Buildings destroyed. Thousands of acres scorched. The peak of the fire season is yet to come, and it’s only being made worse by climate change.

The wildfires blazing in California, Alaska and across the Southwest are threatening communities and natural resources. In Alaska, the first wildfire this season started in late February, yet the season typically begins in April or May.

Already, more than 29,000 wildfires have burned over 2.6 million acres in 2016, increasing concerns that we could see yet another busy, dangerous and costly fire season. Last year was the most severe on record, with more than 10 million acres burned. That’s more than twice the size of the state of Massachusetts. It was also the costliest at $2.1 billion.

The thing that these wildfires have in common: They’re exhibiting an all-too-familiar pattern. They’re starting earlier and burning longer at greater intensity because of persistent drought, record high temperatures and the spread of invasive weeds.

The recent National Climate Assessment study adds to the growing body of research that confirms climate change is increasing wildfire risk. Average annual temperatures worldwide have increased by 1.9 degrees Fahrenheit in the last decade. Winter snow packs melt up to 4 weeks earlier than in previous decades, leaving landscapes drier and making it easier for wildfires to spread when they start. 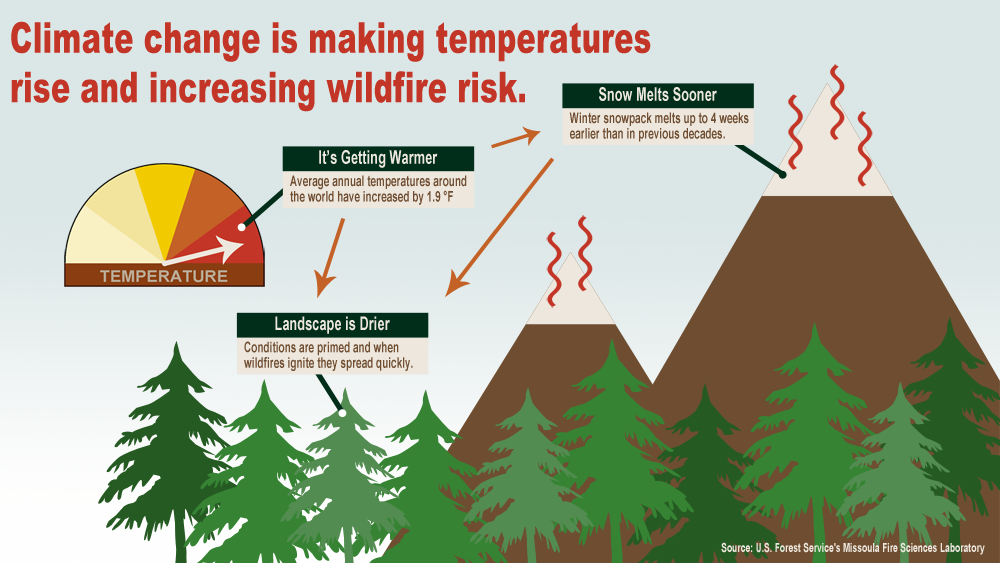 Landscapes and accumulated debris are drier due to extended drought, like in California. These changes in climate conditions are in turn leading to hotter, drier, longer fire seasons.

What is Interior doing to protect people, wildlife and vulnerable landscapes from this growing threat?

Stopping the spread of wildfires not only requires using effective suppression strategies to put out fires but also dedicating the resources to prevent wildfires from happening in the first place. Recognizing that fire knows no boundaries, our top priority will continue to be the safety of the wildland firefighters and the public -- however we need to do a lot more to improve the health of our landscapes as well.

The President’s Climate Action Plan was created in part to bolster the resilience of landscapes to make communities less susceptible to catastrophic fire.

While we won’t be able to prevent every fire everywhere, we can make landscapes more resilient to withstand and recover from the impacts of wildfire and climate change. But to do this, we also need to treat catastrophic wildfires as the disasters that they are.

In the last 15 years, Interior has exceeded its wildfire suppression budget six times. That’s because catastrophic wildfires, which account for only 2 percent of fires, consume 30 percent of suppression costs. This in turn is forcing us to use funds slated for resiliency projects to suppress wildfires.

We urgently need to address the runaway growth of fire suppression costs, and continue funding other critical programs that protect communities and infrastructure, and increase the ability of our lands to recover from wildfire.

The President’s new wildland fire budget framework includes funding for predictable suppression costs but would meet the unpredictable costs of extreme fires by funding them from national disaster accounts. It’s similar to how this country funds other disaster needs, and that’s how we should think of wildfires.

Share
15 Facts About Our National Mammal: The American Bison