The bond between mother and child is like no other relationship. Whether it’s human or animals, moms feed, nurture and protect their young.

This Mother’s Day, we’re celebrating some of the hard-working moms in the animal kingdom. Don’t forget to thank your mom for all she’s done for you! 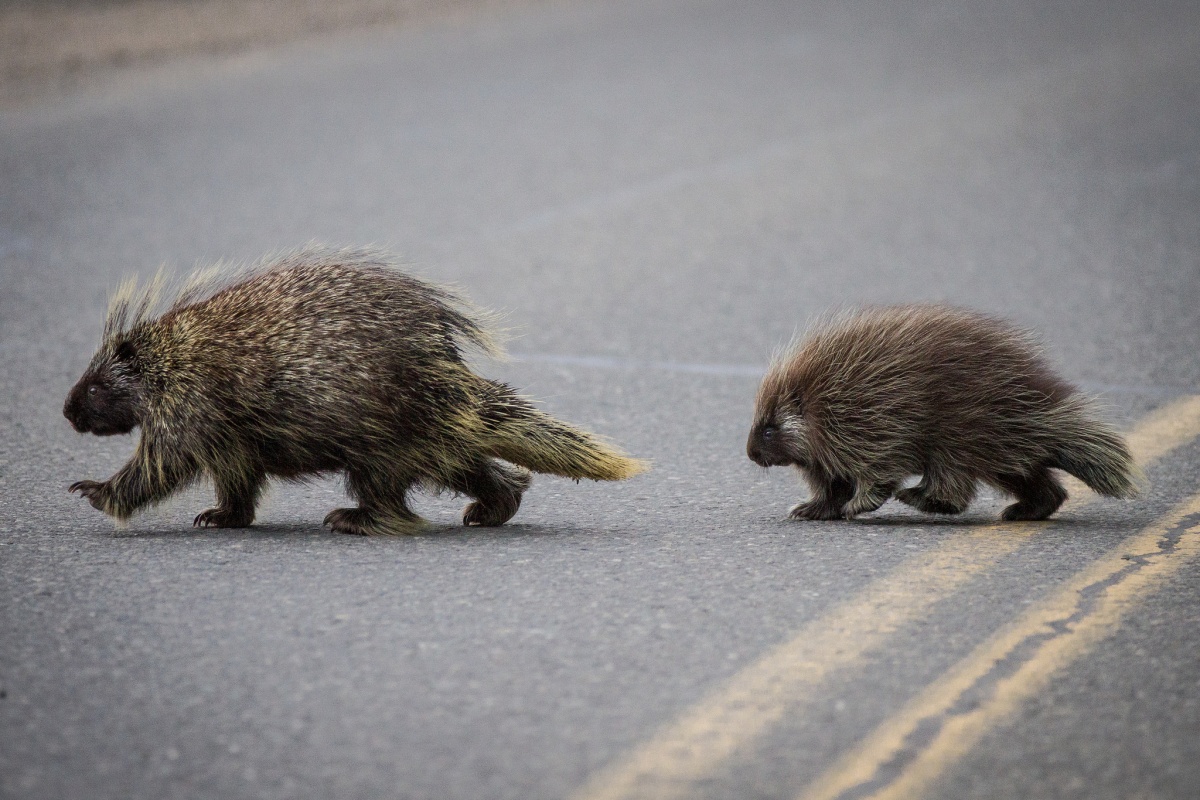 Slow-moving and lumbering, porcupines range from the tundra of Alaska to the deserts of New Mexico. Female porcupines will have one or two young, usually in the spring. These cute babies (called porcupettes) are born with soft quills that harden within an hour. While porcupines are normally solitary creatures, the babies will stay close to their mothers, nursing for 4-5 months— a long time for a member of the rodent family. Within two weeks, porcupettes double their birth weight, and during their first summer, they’ll exceed it by 4-6 times. Mama porcupines teach their young about den sites and food before sending them off on their own in the fall. Photo of a mama porcupine and porcupette at Denali National Park in Alaska by Alex Vanderstuyf, National Park Service. 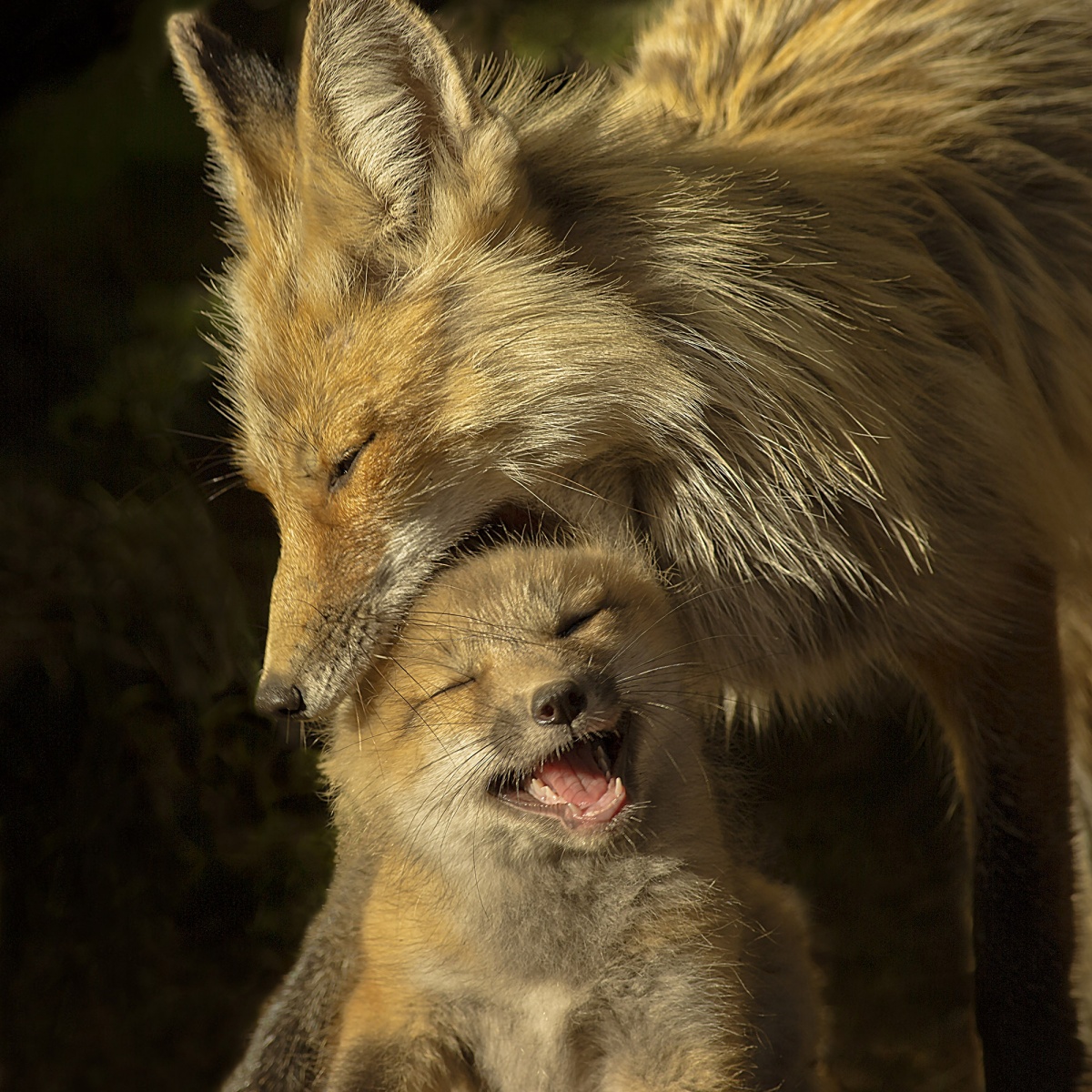 A mother’s job starts in the spring for red foxes when females give birth to a litter of two to four pups (also called kits). Fox pups spend most of the summer in or near the den with their mothers providing them with food and teaching them how to hunt. When the pups are about seven months old, they’re ready to strike out on their own. The photo above has caught a tender moment between mother and young — but it's also a teaching moment. The fox pup is getting scolded for biting its mother’s tail. Photo from Wyoming’s Grand Teton National Park by Rick Kramer (www.sharetheexperience.org). 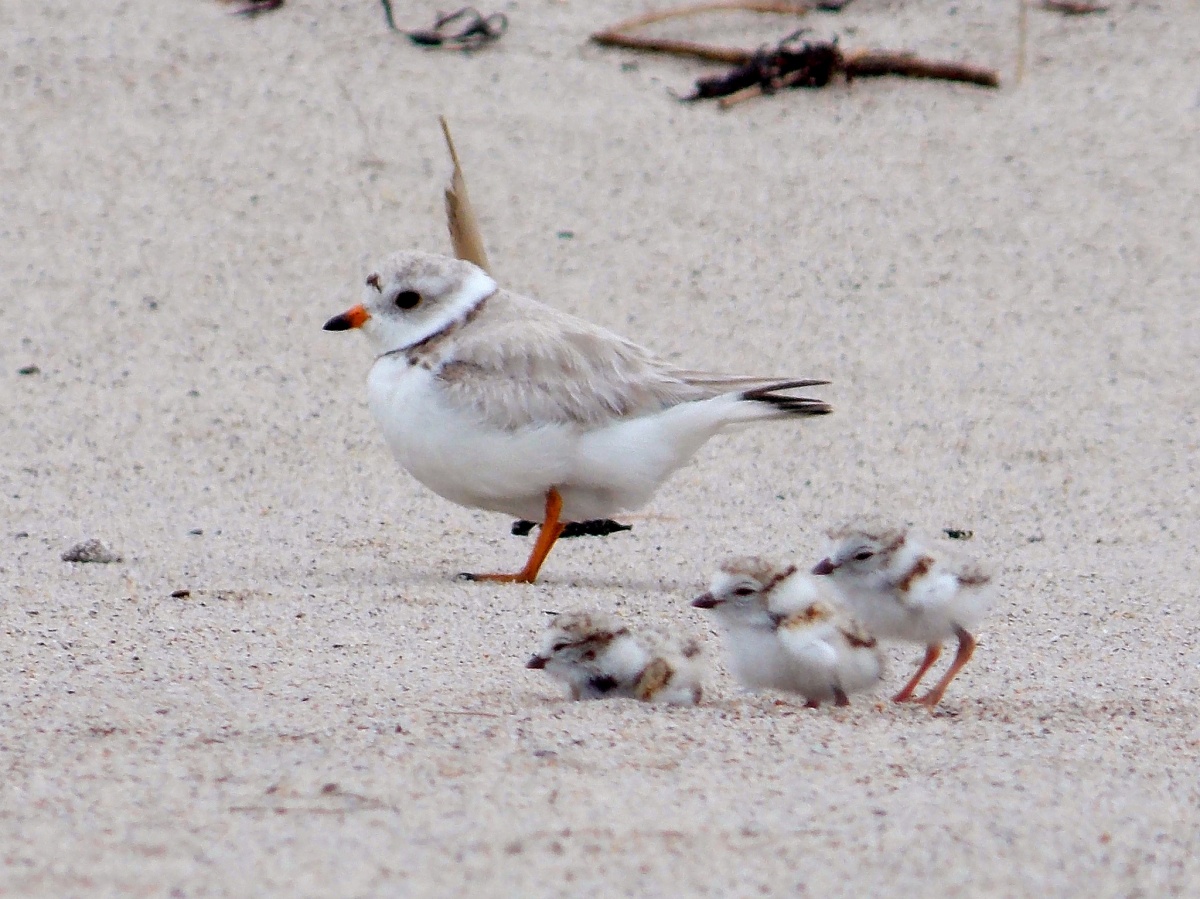 Small shorebirds with sand-colored plumage, piping plovers flock to beaches along the east coast, Great Lakes and northern great plains to nest from mid-March through mid-May. They lay 3-4 eggs in shallow depressions lined with light colored pebbles and shell fragments, camouflaging the eggs from predators.

After the eggs hatch, both mother and father feed the young until they can fly and protect their chicks from predators like foxes and crows. In the meantime, the young can be spotted hiding under their mothers for protection or zooming across the sand in a way that many have likened to a tiny wind-up toy.

Piping plover populations are on the rise, thanks to the work of many partners. But with fewer than 4,000 on the Atlantic coast, each one makes a difference. Photo of a family of piping plover at Rachel Carson National Wildlife Refuge in Maine by Kaiti Titherington, U.S. Fish and Wildlife Service. 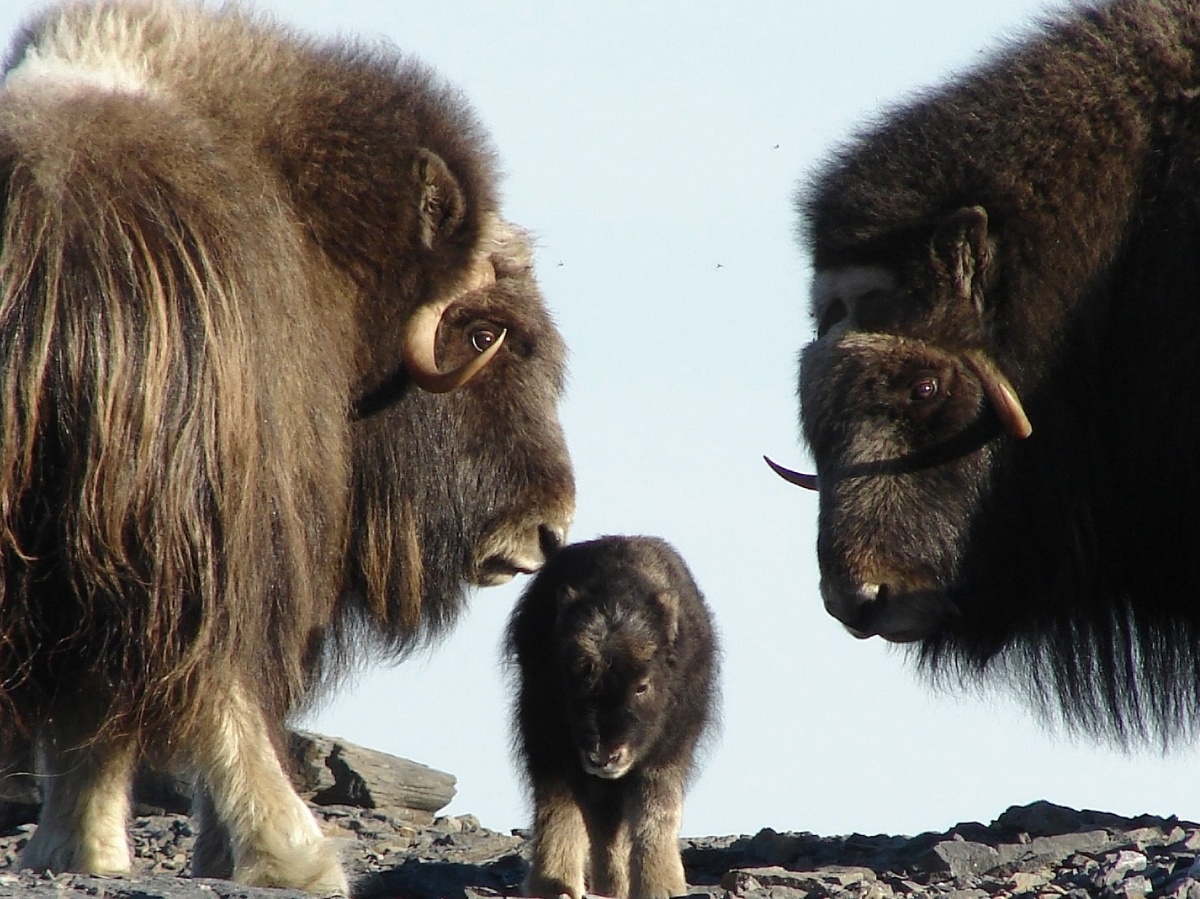 With thick, long fur that trails like a skirt, muskoxen make motherhood look easy. Called Oomingmak in the Inupiaq Eskimo language, meaning “hairy one” or “bearded one,” muskoxen live in complex social circles with up to 75 in a herd, which can be seen frolicking through the Alaskan tundra. A female will give birth to a single calf in April or May, weighing about 20-30 pounds. The calf is able to stand and move around hours after birth, and eats small, tender plants that are abundant and nutritious. When danger approaches, muskoxen stick together, either forming a line or a circle against predators. Calves will stay near their mothers or hide in the center of the circle for protection. Photo of two adult muskox surrounding a baby at Bering Land Bridge in Alaska by Jason Gablask, National Park Service. 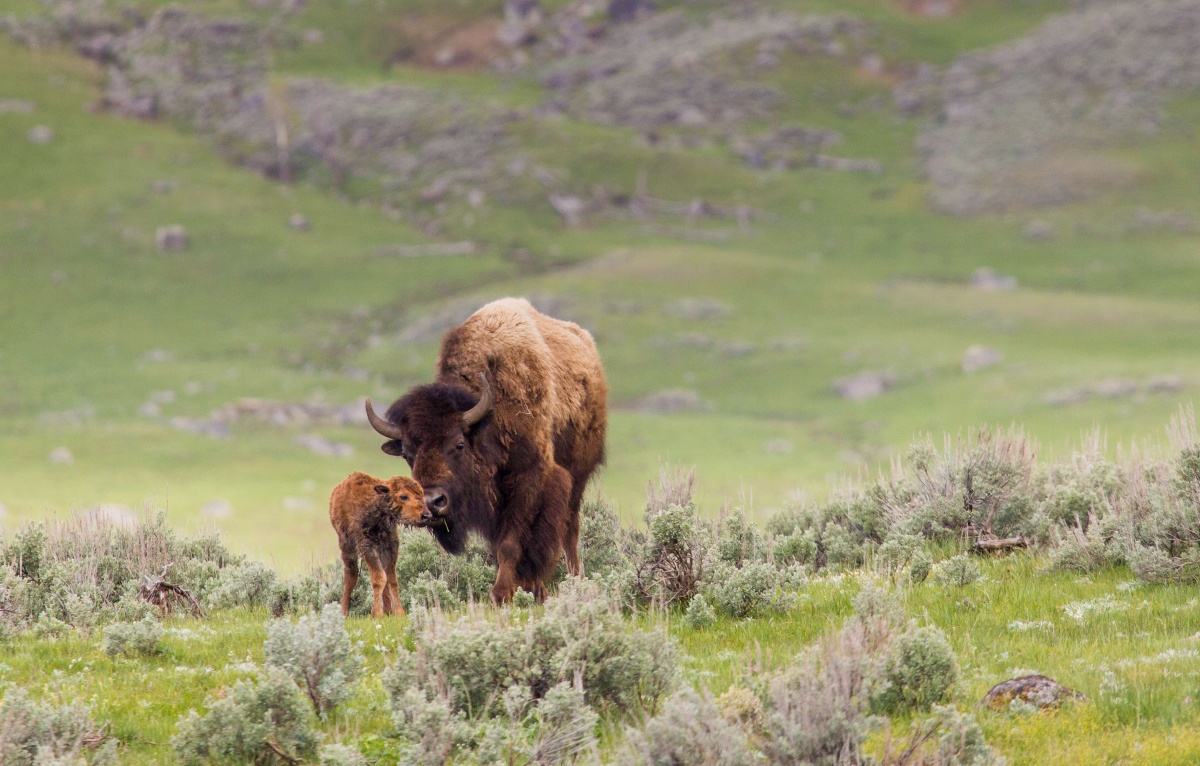 Bison calves are never far from the watchful eye of their mamas. Baby bison tend to be born from late March through May and are orange-red in color, earning them the nickname “red dogs.” For the first few weeks, calves stay very close to their mothers, who are protective of their young. It isn’t long before calves start following their mothers on long distance walks and playing with other youngsters in nursery groups, while the cows in the herd keep watch. After a few months, bison calves’ hair starts to change to dark brown and their characteristic shoulder hump and horns begin to grow. By the end of year one, calves are ready to leave their mother’s side. Check out more cool facts about bison. Photo of a newborn bison and mother at Yellowstone National Park by Neal Herbert, National Park Service. 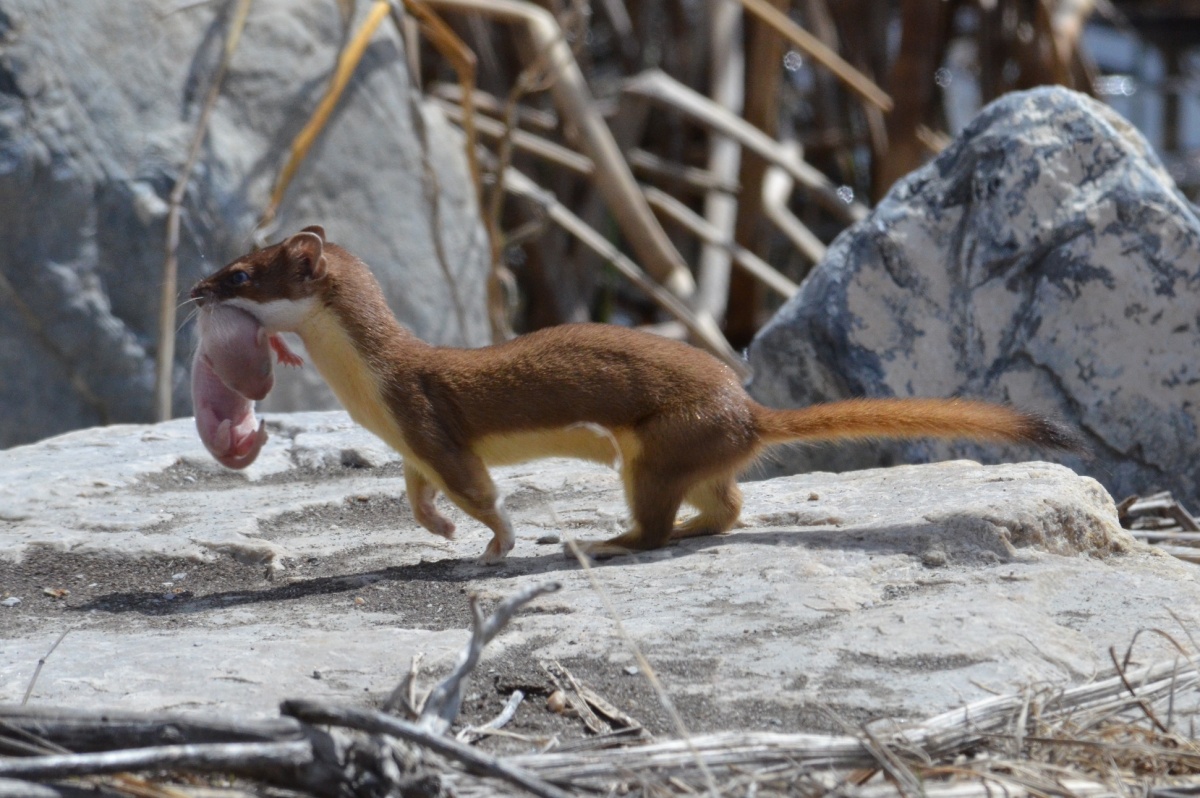 Even though this mama long-tailed weasel looks cute, she’s fierce and a highly skilled predator. Long-tailed weasels have one litter of 6-9 young a year in the spring when conditions are best for survival. The young are born blind, furless and weighing about a tenth of an ounce. They’ll eventually grow to 13-18 inches long and 4.8-11 ounces. In the summer, females teach their young how to hunt — preying on animals larger than themselves, such as rabbits and squirrels. After three months with their moms, the young are mature and ready to go on their own. Photo of a long-tailed weasel and baby at Bear River Migratory Bird Refuge Utah courtesy of Wayne Watson. 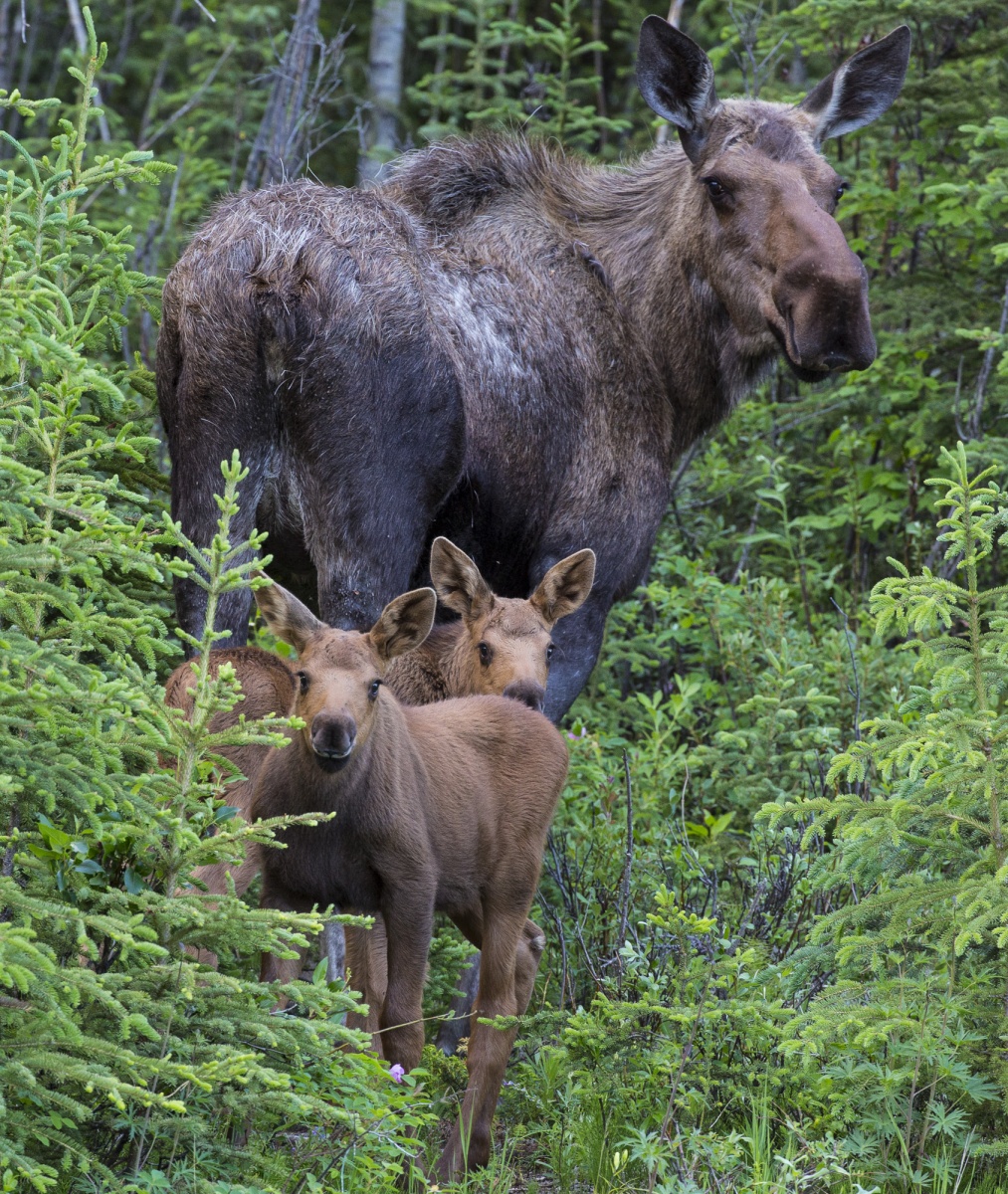 The largest member of the deer family, moose lead routine lives for most of the year. While normally solitary, moose will gather in the fall for the rut (or mating season) and about eight months later, calves are born in late May through early June. When food is scarce and predators abound, moose can skip years between calving. Just a few days after birth, baby moose can eat solid food and will spend the summer with their mothers, fattening up for winter. Word of warning: mama moose are extremely defensive of their young, so use extra caution and never get between a mother and her calf! Photo of moose at Gulkana Wild and Scenic River in Alaska by Bob Wick, Bureau of Land Management. 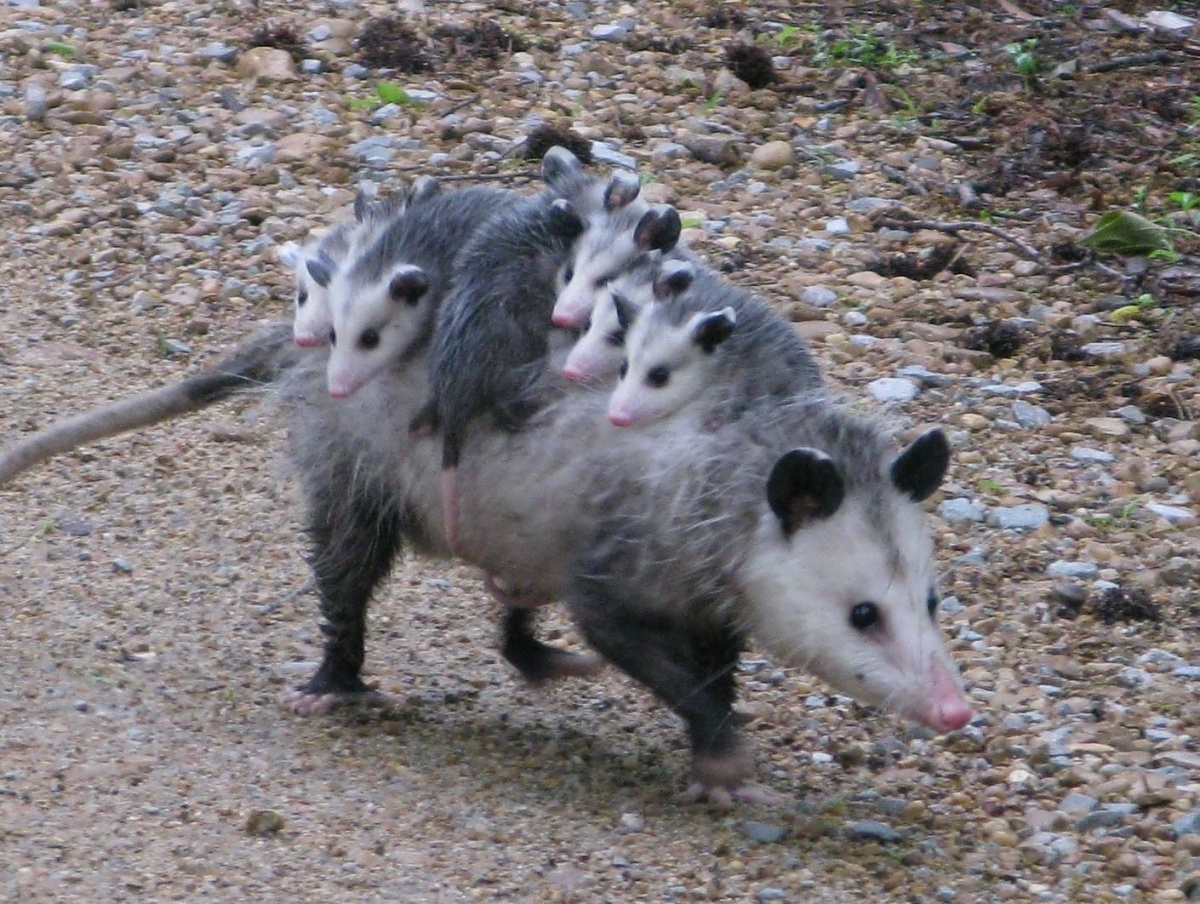 No one is busier than a mother opossum. Officially called the Virginia Opossum, the opossum is primarily found in the eastern United States and is the only marsupial in North America — carrying its young in its pouch until they are fully developed. These dedicated mothers give birth to young that are the size of honeybees and nurse them for two months in their pouch. Once the young leave the pouch, they will often hitch a ride on their mother’s back. Mama and baby opossum have a special language to communicate. Mothers make a clicking noise and their young respond with slight “choo choo” call. Photo of an opossum family at Wapanocca National Wildlife Refuge in Arkansas by Bill Peterson, U.S. Fish and Wildlife Service. 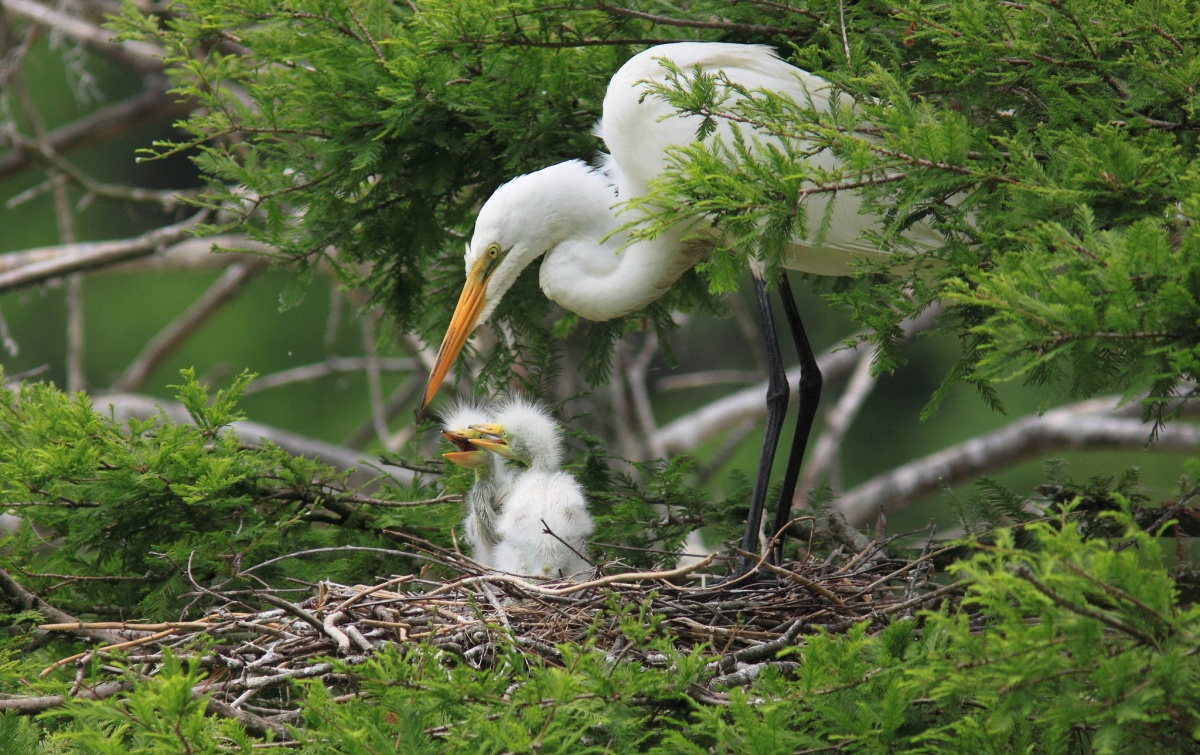 Spectacular large wading birds, female Great Egrets can be surprisingly gentle mothers. Second only to the Great Blue Heron in size, Great Egrets stand more than 3 feet tall and have a wingspan of almost 5 feet. Nesting with other birds in shrubs and trees over the water, male and female Great Egrets take turns incubating their eggs and caring for their young. When they hatch, baby egrets have fluffy white down and pink beaks that eventually turn yellow. The chicks stay in the nest for about three weeks before leaving for short adventures in the trees. They eventually take their first flights at five to six weeks old. Photo of a Great Egret family nesting at Georgia’s Harris Neck National Wildlife Refuge by Mary Ellen Urbanski, U.S. Fish and Wildlife Service. 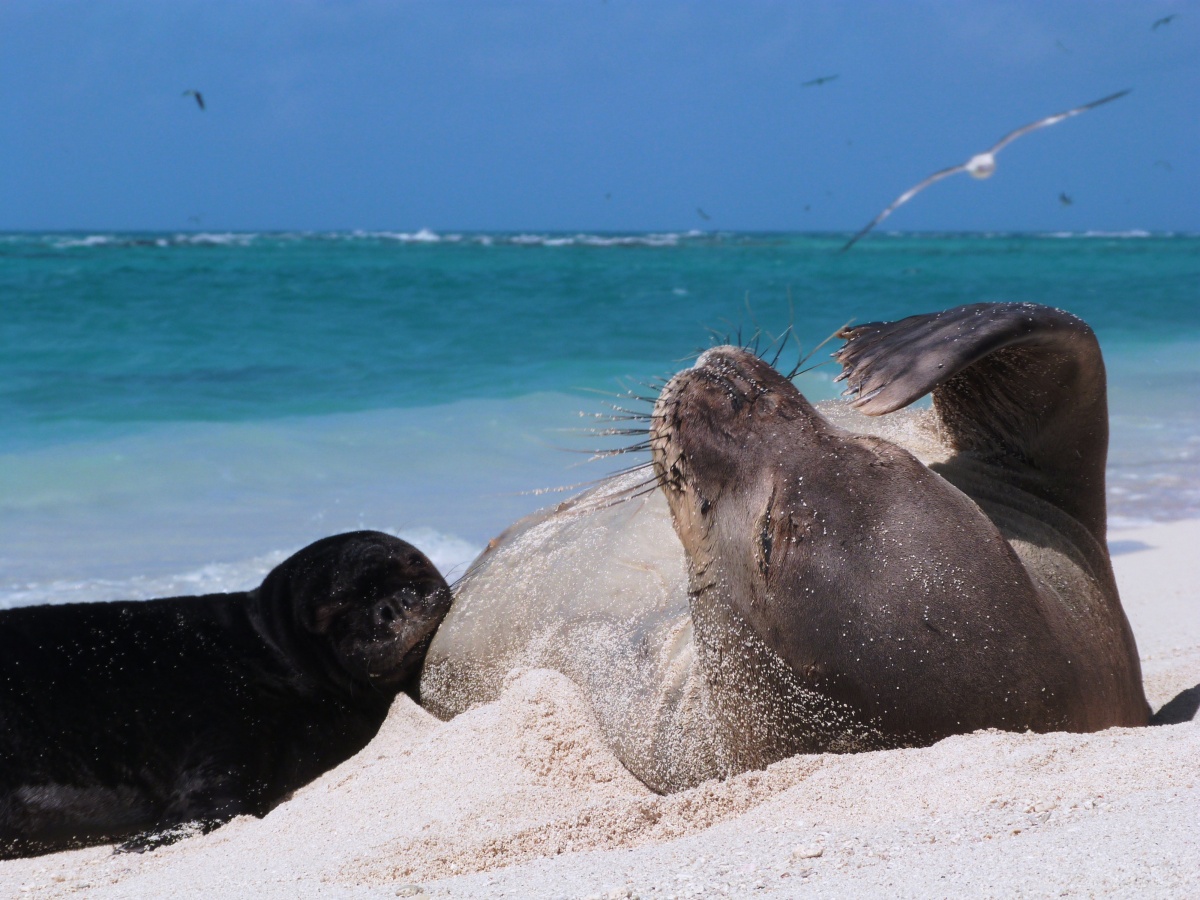 Monk seals are incredibly dedicated marine mammal mamas. Mother seals often give birth near uninhabited shores to protect their young from predators. For the first five to six weeks of life, the mother nurses her baby constantly, rarely leaving its side. Pups are born weighing about 25 pounds, but more than quadruple in weight from their mothers’ rich milk until weaned. Mother seals can lose up to 300 pounds while nursing because they don't feed themselves during the nursing period. After molting their jet black fur, the pups are ready to swim off on their own. These seals are critically endangered, and the only two species that remain can be found in Hawaii and the Mediterranean. Find out more about efforts to help monk seal populations. Photo of a mother monk seal and her pup at Papahānaumokuākea Marine National Monument by Mark Sullivan, NOAA Fisheries. 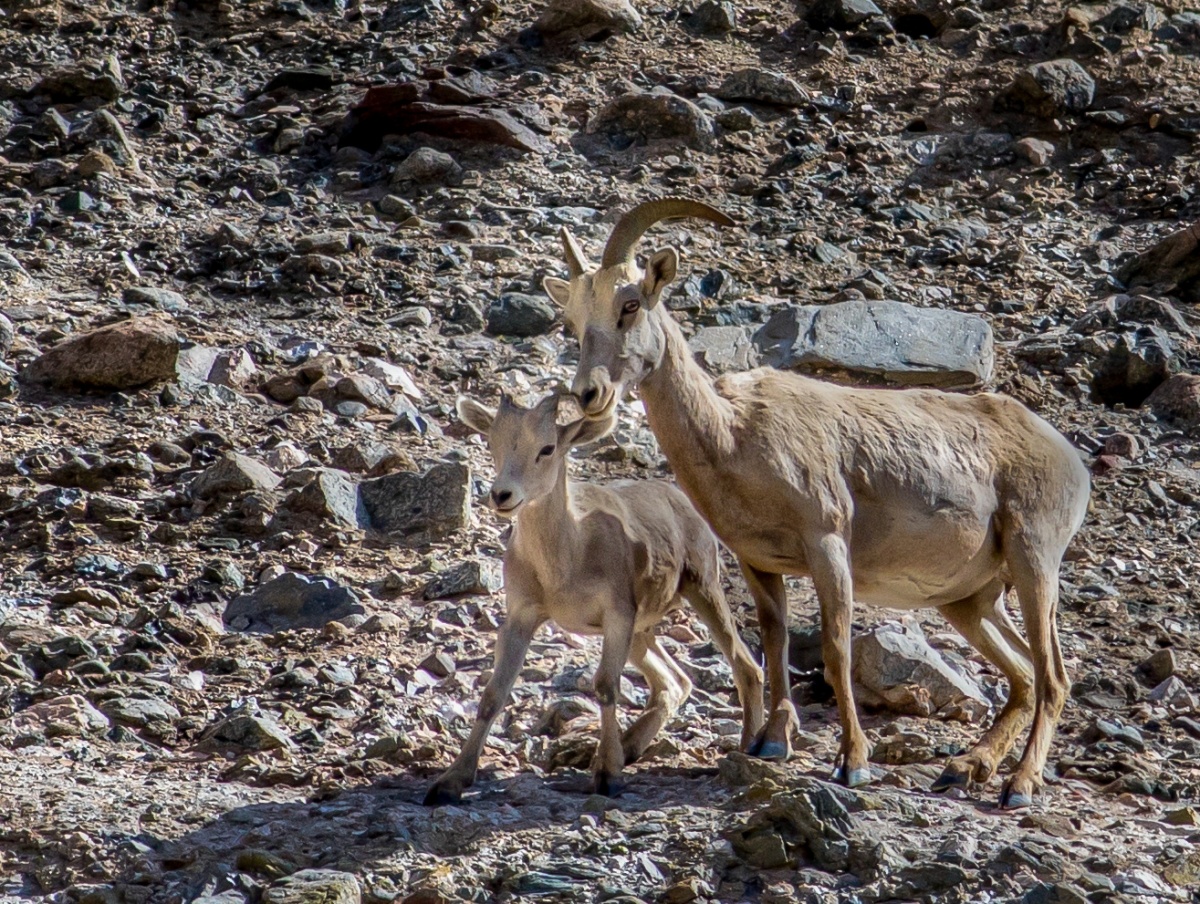 It takes a village of ewes to raise desert bighorn sheep lambs. Found throughout the American Southwest including the Mojave and Sonoran deserts, desert bighorn sheep raise their young in a nursery system of 25-100 sheep. Ewes have their young during the spring in high terrain that allows for quick escape — providing protection from predators. After lambs are born, a couple of ewes will stay with the young, while the other females in the group go to feed. The moms will return to the lambs occasionally to nurse and exchange places with the nursery ewes. By six months, lambs are eating solid foods and start traveling with their moms. During this time, bighorn sheep pass knowledge of home ranges and migration routes to their young. Photo of a mother and baby bighorn sheep at Sand to Snow National Monument in California by Bob Wick, Bureau of Land Management. 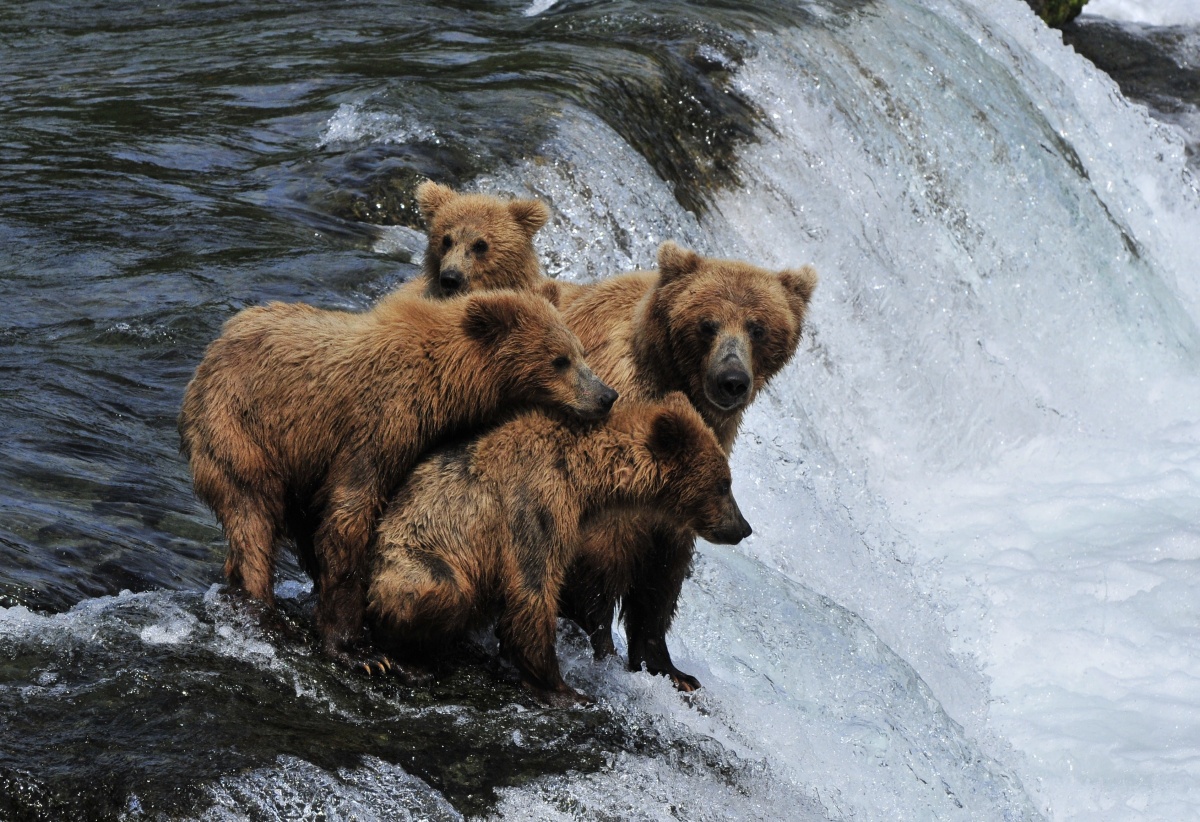 Mother bear is the best teacher. Bears give birth in the winter and can have one to four cubs in a litter, with twins being the most common. Unlike other large mammals, bears are blind at birth and extremely small — weighing about one pound. Over the next several months, mother bears nurse their young until they emerge from their dens in late March or early April. Cubs will stay with their mothers for about 2.5 years learning survival skills and imitating mama’s every move. Learn more about the different species of bears. Photo of a mother bear teaching her three cubs how to fish at Katmai National Park in Alaska by Mark Burnley (www.sharetheexperience.org).

Happy Mother’s Day to all mothers out there! 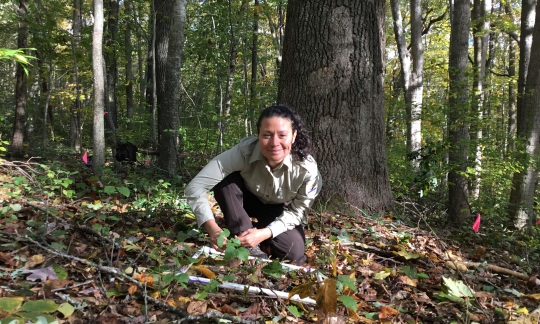